Bombay was the old name of the Mumbai (at least about 1995): one of the most populous cities in India, the state capital of Maharashtra. Mumbai is located on the west coast of India and has a deep natural harbor, which handles almost half of India’s maritime transport goods.

According to a popular theory of the origins of the traditional name “Bombay”, this name derives from the Portuguese bom bahia. The term bahia would be for “bay”, and this explanation is supported by the fact that the English name Bombay contains the suffix bay (bay), while bom, also in Portuguese, meaning “good.” According to this interpretation, bom bahia would mean precisely “good bay” and “Bombay” was a distortion of the name. However, the term “good bay” would be boa Portuguese baía (old spelling bahia), and not bom baía, so this theory is not generally accepted.

The Bombay appears in two versions (n. And n. 2) in the book by Harry Craddock. In the first variant looks like this:

The version no. 2 is the following:

It also appears in the cookbook World drinks and how to mix them Boothby, where in version 2 is used instead of Cognac Brandy. Embury instead in his The fine art of mixing drinks compares it to a Medium Manhattan, with some modified ingredients.

On December 7, 1951, with the birth of Decree Law no. 1559, was christened Italian brandy. Until then, the spirits produced by Italian grapes were called “cognac”. Only after following the dispute French (Cognac could be produced only in France, in the Charente), it came to this. The above law left the choice to the manufacturer to call spirits, brandy, Arzente, Arzente (this is the Italian version dell’aguardiente Spanish, coined by Gabriele d’Annunzio under fascism, when we could not use foreign words ).

The producers were unanimous in choosing the term Brandy, Dutch Brande wijn, burnt wine. According to others, the word appeared for the first time in the seventeenth century in an English ballad (It is more than the end Brandewine).

If we dig even in the etymology of the words, we find Brant, who is the German word for ember and Braudr sword. The similarity of the two terms lies in the “flash” and vibrate that belong to the flame and the blade of the sword. Wine of fire or burnt wine so are the terms for Brandy.

Brandy is aged for at least two years and drink, such as Cognac in special glasses called egg-trunk or tulip. At one time appeared the appropriate “scaldabrandy”, but rather was a fashion of the moment: the only hand warmers are allowed. Among the many Italian companies producing brandy, it is worth mentioning the Buton (whose founder Jean Buton moved from his native Charente Romagna) in Bologna began producing liqueurs patriotic names like “Liquor Lombardi,” the “Great San Bernardo “, the” Rose of Monaco “and” Liquor Forest “, and of course Cognac (at that time you could still call it the distillate made ​​from the Trebbiano of Romagna). The company then passed to the family Rovinazzi Sassoli and then to the Marquis de ‘Bianchi who made an international industry.

Note also the Stock of Trieste, which came to light in 1883 by Lionello Stock. According to the story, the young twenty year old walking with his friend Charles Camis near a port, loaded on a French ship saw a good number of barrels of wine from Veneto and Friuli for the Charente, at that time with the vines devastated by downy mildew. So it was that he decided to work on their own, starting from the raw material he had at hand.

Other famous Italian spirits are the “Stravecchio Branch”, the “Red Horse” of SIS1, the “René Briand” of the NPT in Turin, the ” Arzente “in Williams, the” Old Libarna “the Gambarotta, the” Saint Honore “Landy Frères, the “Old Piedmont” Martini & Rossi, the “Grand Senior Black Label” Distillery Fabbri, among other brandy products from Sarti, Camel, Carpené Malvolti, Florio, and so on.

These were the names that turned when Mumbai was popular in the American Bar Today many of these have disappeared. Have fun trying findings on Ebay.com or in some old bar lost … 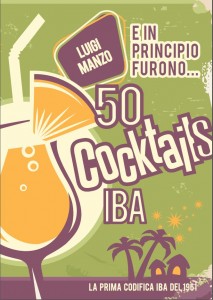